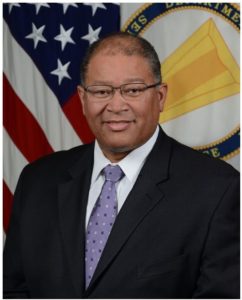 “Michael was a cherished senior leader in the logistics community, and will be sorely missed,” said Maj. Gen. Rodney Fogg, CASCOM and Fort Lee commanding general. “He was a Soldier for Life, veteran, family man and mentor to many.”

As a Senior Executive Service leader since October 2007, Williams was a keystone leader in America’s government civilian workforce, equivalent in rank to a general officer in the military. He was appointed president of ALU in March 2016.

Prior to his position here, Williams was the Director for Supply Policy, Programs and Processes in the Office of the Deputy Chief of Staff, G-4, Headquarters Department of the Army, Washington, D.C.

Born July 21, 1960, in Hampton, Williams graduated from the U.S. Military Academy in 1983, where he was an all-American football player. He served with distinction as a military officer before transitioning to the civilian workforce and becoming an SES.