FORT LEE, Va. — Fort Lee police are looking for a missing teenager, who was last seen more than a day ago.

Layne-Brown is described by police as an African-American female, 4 feet, 9 inches tall, weighing 85 pounds. When last seen, she was wearing dark pants and khaki pullover.

Anyone with information about her whereabouts is asked to contact the Fort Lee Police Desk at (804) 734-7400. 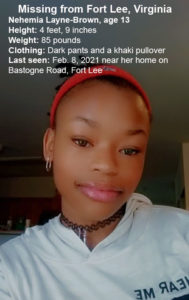