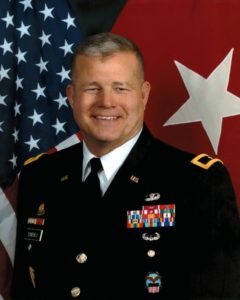 Simerly will replace Maj. Gen. Rodney D. Fogg, who has been reassigned to Redstone Arsenal, Ala., where he will serve as deputy chief of staff for logistics and operations at U.S. Army Materiel Command.

WHAT: CASCOM Change of Command

The incoming commander most recently served as the director of logistics for U.S. Forces Korea. Over his career, Simerly also has served as the commanding general of the 19th Expeditionary Sustainment Command; Defense Logistics Agency Troop Support; and the 4th Sustainment Brigade.

Upon graduation from the University of Richmond in 1984, Simerly was commissioned as an air defense artillery lieutenant. He transitioned to the Transportation Corps in 1994. He also served at Fort Lee as the director of Capabilities and Integration at CASCOM from 2015 to 2017.

In addition to his Bachelor of Arts degree from UofR, Simerly holds a Master of Science in National Resource Strategy from the National Defense University and a Master of Military Arts and Sciences from the Army Command and General Staff College.

Simerly is scheduled to be promoted to major general before the change of command ceremony.

Media interested in covering the ceremony must contact Alyssa Crockett, CASCOM public affairs specialist, at (804) 735-8586 or alyssa.m.crockett.civ@mail.mil to obtain the necessary approval.

Please confirm attendance of the event before 5 p.m. Thursday, July 8. On the morning of the event, media will be met at the welcome center parking lot outside the Lee Avenue Gate at 8 a.m. for an escort onto post.