A career counselor two years running, Staff Sgt. Robin Stubbs had never been part of a reenlistment ceremony like the one that took place at the Army Women’s Museum Monday.

Silhouetted by an American flag and in the presence of family, friends and fellow Soldiers, a same-sex couple raised their right hands to “support and defend the Constitution of the United States.”

“I’ve done reenlistments for married couples, but never for the same sex,” Stubbs said with a laugh, “and, coincidently (it happened to be) my own ceremony.”

She and her wife Malaysia, an Army sergeant, recited the oath of enlistment in an otherwise nondescript ceremony. It resonated, however, with undertones of a bygone era and a modern Army forging into the future with the weapons of inclusivity and acceptance at its side.

“Today’s climate has improved so much and come so far over the years,” said Col. Clydea M. Prichard-Brown, the 59th Ordnance Brigade commander who administered the oath. “The fact they’re here willing to show … that being a proud Soldier has nothing to do with who you love but everything to do with what’s in your heart – giving back to our country … it’s honorable. I’m proud of them, and I support them in everything they want to do.”

Homosexuality in the U.S. military was prohibited prior to 1993. That same year, the “Don’t Ask, Don’t Tell” policy allowed it, but military members were prohibited from openly expressing their sexual orientation. A 2012 change in regulation allowed troops to serve openly, and same-sex marriages became legal in 2015.

Staff Sgt. and Sgt. Stubbs – a former medical logistics specialist and utilities equipment repairer, respectively – met over a year ago. They were married in February and are the parents of a toddler. Staff Sgt. Stubbs said her leadership showed no indication her lifestyle would be an issue.

“I knew I had the support,” said the Headquarters and Headquarters Company, 59th Ord. Bde., Soldier. “When I first met Col. Prichard-Brown, literally, in five seconds, she was open arms … and we haven’t had any negativity from command teams. We’ve always been open about it. We’ve taken that risk because we’re not ashamed to say we’re a same-sex couple.”

Sgt. Stubbs, a drill sergeant, said she’s familiar with the changes that have occurred over the years in reference to sexual orientation but aligns herself with a new generation who questioned the law’s existence in the first place.

“As long as we’re not doing anything unethical or immoral, I feel like we deserve our rights to be women and married in the Army if we love each other,” said the Delta Company, 832nd Ord. Battalion Soldier.

Staff Sgt. Stubbs said the Army’s inclusive posture has made it easier to concentrate on soldiering rather protecting who she is.

“I joined in 2007,” she said. “Even in my first few years in the Army, I was still hiding who I was, and I couldn’t say much about it. … (I was) worried about being kicked out. It shows the Army is willing to adapt. If they want us to adapt, they have to adapt, too. As long as we’re doing our jobs right, it shouldn’t be an issue with who we choose to marry.”

Earlier this year, an Army initiative – Project Inclusion – solidified service-wide efforts to “improve diversity, equity and inclusion across the force and build cohesive teams,” according to an Army Public Affairs article.

Project Inclusion kicked off with listening sessions and sweeping changes such as the elimination of official photographs from personnel records placed before promotion boards. It is working in concert with the service’s People First campaign aimed at “fostering a culture of trust that accepts the experiences and backgrounds of every Soldier and civilian,” in the words of Gen. James C. McConville, Army Chief of Staff. 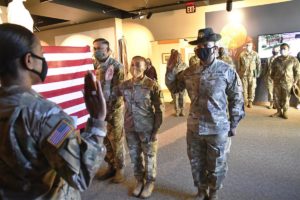